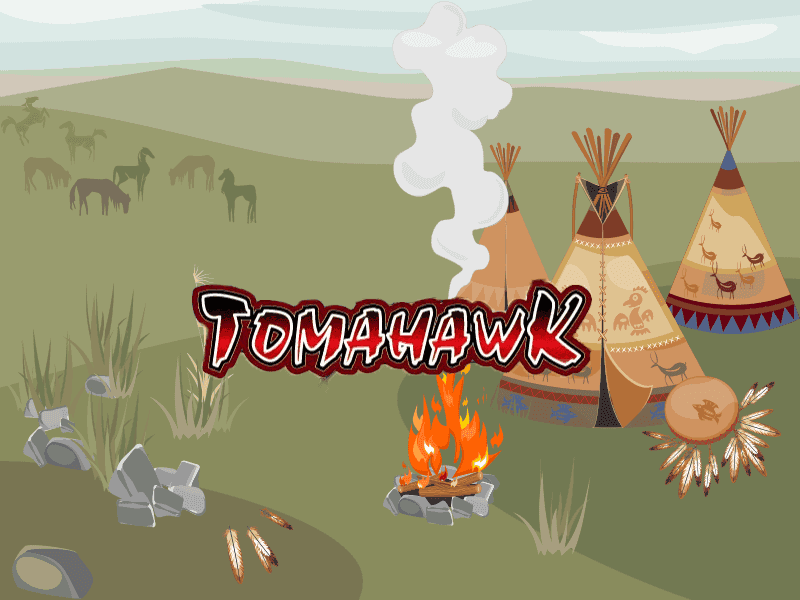 Tomahawk is a Native American based online slots game powered by Saucify gambling software developer. The slot has the following characteristics: five reels, three symbol rows, scatters, wilds and a free play round with extra multipliers. There are no standard paylines, but there are fantastic 243 win ways called “Max Ways”. To adjust wager amount, gamblers should choose coin size (0.01-0.25) and the number of coins played (from one to five). The minimum bet is 25 coins and the maximum one is 125 coins. Also you can play such interesting game like Scorching Sevens.

The theme of this online slot machine is a culture of Native Americans. The slot features different ornate icons, a wigwam, a dragonfly, a young brave and playing card symbols (J, Q, A, K)symbolizing the four main elements – air, water, earth & fire. Five reels are placed between two totem poles against a backdrop of the mountain skyline. The gameplay of the Tomahawk online slots game is accompanied with ethnic music of indigenous peoples of America. It is too popular Classic Pompeii slot (for desktop).

A tomahawk itself acts as a trigger of free spins. Whenever 3, 4 or 5 tomahawks appear in any place on the reels, you get 5 free spins with x2 multiplier, 10 rotations with x2 multiplier or 15 free rotations with x3multiplier respectively. Also, tomahawks can form their own winning combinations granting a prize in amount up to 100 coins bet. The “Brave” icon is a wild which substitutes for any symbol barring the Dreamcatcher and tomahawk symbols. Moreover, three wilds on a payline (to be more exact – on a win way)give 75 coins bet, four ones give 100, and five “Brave” symbols grant 700.

The Dreamcatcher image is a scatter symbol. Scatter icons are paid in addition to “Max Ways” winnings. Dreamcatcher wins are calculated as follows: total credits wagered are multiplied by a coefficient specified in the paytable (6, 12 or 80 for three, four or five scatters respectively). Occurrence of three or more Dreamcatchers launches Totem Builder bonus game which starts on the separate screen featuring a totem pole without carvings. A player should choose carvings for four totem pole’s sections (starting from the bottom), each carved section gives him a prize. Prize amounts are proportional to the amount of the stake that triggered Totem Builder bonus. 100 paylines is a rare bonus and there is Wild Panda slot machine with no download or registration.